Recently, a reader asked me for a little help deciding between two popular portable grills.

She is looking to give one to her husband as a Father’s Day gift, but when researching which grill she should buy, she has become completely stumped as to which grill is better suited to her family’s needs.

She has narrowed her list down to two choices: The Weber Q 220 and the Coleman RoadTrip LXE.

These grills are two excellent examples of great quality grills made by two well-known companies. While either of them would be a great choice, depending on who you are one certainly could be better than the other.

These grills do certainly vary in features and design. They both have a similarly sized cooking surface, and both are roughly the same weight.

But this is where the similarities end. Make no mistake: they are two very different portable grills.

Depending on what needs you have, either of these grills could be a good choice.

But why settle for a good choice when the other could be perfect? The RoadTrip LXE is a surprisingly well designed grill.

Built to be extremely portable while retaining the qualities of a full-size grill, LXE owners have the ability to set up virtually anywhere and cook a wide variety of foods.

It also has a total of 20,000 BTUs for fast cooking and loads of accessories available.

Coleman makes this grill with fairly high-quality materials and backs it with a limited 5-year warranty.

Several accessories are available but are not at all necessary.

Read my full review on the RoadTrip LXE grill for more information. 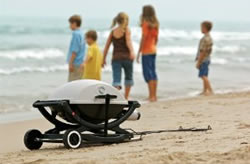 The Q 220 is a very durably designed grill. With high quality materials such as a stainless steel burner, cast aluminum body and weather resistant frame, this grill is designed to weather the elements with no sign of rust or deterioration.

Weber also backs the Q 220 with a 5-year limited warranty and is known to have spectacular customer service.

If you would like to see more detailed information on this grill, read my full review on the Weber Q 220 Portable Grill.

What Are the Differences Between the RoadTrip LXE and the Q 220?

While both grills weigh roughly the same, there are differences in how easy they are to transport.

The LXE is larger and slightly heavier than its Weber counterpart, but that’s because it has its own stand, which when folded upturns the entire grill into an easy-to-tow unit. It also has fairly flat surfaces, so stacking other things around it when storing in a vehicle isn’t much of a problem.

While the Weber Q has solid handles that make it fairly easy to carry around, its odd shape makes it difficult to pack around and may not be the best choice for those with little storage space to work within an RV or small car. And unless you’re willing to shell out extra cash to buy the collapsible rolling cart, consider that you will need a table or flat surface to cook with it.

The convenience of how easy the Coleman is to transport definitely gets points here.

The Coleman LXE is more portable.

The Weber is rated at 12,000 BTU’s out of a single burner while the Coleman is rated at a total of 20,000 BTU’s over two independently controlled burners.

Now, before you think that the Coleman wins hands down on heat, consider that the Q 220 has a cast aluminum body that will retain heat much longer than the RoadTrip can.

Also consider that the Coleman is designed more for quick grilling, while the Weber Q is designed to act more like a traditional grill and has more of a balanced heat for its size.

Overall, there are benefits to either grill as far as heat is concerned. Since this is more of personal preference, we’ll call this one a tie.

There are a few factors that set each grill apart, and this is where attention must be paid.

Both grills roughly have the same cooking surface area with the Weber having just 5 square inches less than the Coleman’s 285. Both grills also come with thick and heavy cast grill cooking grates coated with porcelain, which is what you need put perfect grill marks in your steak and chicken every time.

Either of these grills will easily cook for a family of four, and will easily cook for more people if only grilling meat or simple fares such as preformed hamburgers, hotdogs, or sausages. Both grills are also large enough that cooking a rack or two of ribs is certainly not out of the question.

The Coleman LXE has interchangeable grill plates. Out of the box, it comes with two grill plates that each cover half the grill. You can purchase separate cast iron griddle and stove grates to cook a variety of foods that you could never cook on a grill, such as pancakes or sautéed vegetables. Mix and match to cook sausages on one side and eggs on the other, or steaks and mushrooms – you get the idea.

On the other hand, the Weber doesn’t have the shallow lid that the Coleman has, and is able to cook foods with a high profile, such as roasts or chicken. Also, because the Weber has the same sort of performance as a classic-sized grill, slow cooking ribs or roasts are certainly not out of the question. Weber is a better pick for those that want to use their grill in a more traditional manner.

Overall, when looking at the versatility and amount of food each grill can cook, we call a tie.

Of course, the Q is made out of stronger materials, but in my personal opinion, the RoadTrip is also a very durable product and will last just as long as it’s stored properly.

When it comes to considering the price, the LXE is the clear winner.

Summary: Which Grill Is Best?

Though both grills have slightly different advantages to cooking, choosing one over the other really comes down to personal preference. If you like variety or want to cook for the ball team, the Coleman LXE is probably your best bet. On the other hand, if you like traditional bbq style cooking, the Weber would be better.

If your main concern is portability, both grills can be considered equally portable if the Weber has the additional collapsible cart. But that immediately makes the Weber Q 220 nearly twice the price when purchased with the stand.

And of course, that brings us back to out-of-the-box price, and the Coleman wins hands down – the features it provides out of the box far outweigh what the Weber does.