Skip to content
Note to our readers: We may earn a commission for purchases using our links. Learn more.
Coleman RoadTrip LXE
Reviewed By: Josh Klassen

I like to call the Coleman RoadTrip LXE the starter version of the RoadTrip line of portable grills.

For its less-than-average price tag, it packs in a ton of features and is easily one of the most versatile portable grills on the market.

Even with the smaller price tag, it still has all of the best features that other grills in this line share.

Coleman created a product that took the best of portability and cooking ability and merged it into one fantastic grill that can go nearly everywhere.

This grill is so versatile, it’s perfect for RV camping and trips, or picnics and tailgate parties.

My favorite feature of this grill is what you can cook with it. Cook steaks on one side with a cast-iron grill grate, and sauté onions on the other side with an accessory griddle plate. Or, cook pancakes on one side and bacon on the other, without worrying about bacon grease invading your pancakes. How about eggs and coffee? Or steak fajitas? With mix and match plates, your options are endless.

I also really like how big this grill is. For a portable grill, you would be amazed at just how big the cooking surface is. It’s 285 square inches, but for those of us who need a little help imagining just how much room that is, think of it this way – the grill itself is 24″ wide and 12″ deep. That is more than enough room to cook food for a family of four and a guest or two.

What really makes this RoadTrip grill a tremendous portable grill is just how easy it is to take with you. Yes, it might have a large cooking surface, but it folds down in a snap. The stand cleverly becomes an extendable handle on one side and wheels on the other, making the LXE very easy to wheel down to your favorite beach spot.

This grill might not be the smallest, but it’s evident that Coleman took great care in designing the LXE to make sure that is was very easy to set up, tear down and tote around.

As I mentioned previously, it can go from compact to completely set up and ready to light in less than a couple of minutes. It takes less than a minute to erect the stand from a folded unit to its cooking position. It takes one minute more to connect the regulator to the LP bottle and attach it to the back of the grill.

However, I would not recommend this grill for backpackers or anyone who has to travel long distances on foot or across rough terrain. Space for storage should also be a consideration, as even in its packed up form, the LXE is more than 2′ long and a foot wide.

This is by far one of the most capable portable grills on the market when it comes to what culinary wonders you can create with it. Several features of the LXE work in combination to allow you to get the most out of your meals with one single cooking appliance, whether it’s breakfast time or steak time.

Two powerful burners produce up to 10,000 BTU’s each to provide even heat distribution and quick cooking. Each burner is controlled independently, allowing for different temperatures on each side of the large cooking area. It can easily provide enough heat to sear steaks and chicken perfectly.

With the option to purchase different styles of cooking plates, you can also cook in two different styles at the same time. Quickly grill steaks or chicken on one side with a cast iron grill plate, and sauté vegetables on the other side.

There is a downside, and it is that the lid clearance is not very high. This will limit some of your choices as it will not handle large items that need the lid down to cook, such as whole chickens or larger roasts. I’m not sure many people wouldn’t consider using it that way anyway.

Another point against it is that because it is so hot, there is a bit of a learning curve to getting the right temperature for cooking. I think it was designed to cook hamburgers and hotdogs at lightning-fast speeds, which it does well. For grilling anything else, you will probably want to have the temperature down quite low until you are familiar with how fast it can cook.

Coleman suggests that a disposable LP bottle will allow you to cook for up to 1.1 hours with both burners set on high or 4.5 hours on the lowest setting. Because you probably won’t need the grill running on high all the time, expect it to last for around 2 to 3 hours of use.

I have mixed feelings when it comes to cleaning the unit.

The Good: The grill plates that come with the unit are easy to clean. They are cast iron with a porcelain coating, which means that they can be soaked, won’t rust, and don’t need to be seasoned.

The Good: The grill plates that come with the unit are easy to clean. They are cast iron with a porcelain coating, which means that they can be soaked, won’t rust, and don’t need to be seasoned.

The grease trap is handy, too, especially when you are cooking bunches of frozen burgers.

Otherwise, Coleman recommends cleaning the unit – inside and out – with mild soapy water and a soft cloth. To that, I would add that you dry it thoroughly after washing and rinsing.

There are a couple of issues that I have with the way the LXE was made.

The first is that the body is made of steel, and without proper care and cleaning, the interior can rust very quickly. The paint coating on the outside can chip and scratch without much work either. In general, it’s not a good idea to keep it stored outside.

Also, it seems that quality control over at Coleman is a bit off. While I didn’t have any problems, I’ve seen a few reports of incorrect assembly. Unfortunately, many of these reports quite new and apparently haven’t been dealt with by the manufacturer.

On the other hand, several complaints from years ago seem to have been corrected in the design. Old claims of melting handles, lids, and even grill grates have been replaced by comments happily reporting that modifications were present in the product they received. It’s good to know that Coleman is trying to address some of the issues!

Some of the changes that have been made include making the grill easier to clean. The grease tray is now made of metal instead of plastic, and screens have been placed to make sure that food and grease don’t get into places they shouldn’t. Also, reports of the lid and/or handle melting have disappeared as well, because the added heat shield protects the handle from heat.

Coleman provides a 5-year limited warranty on the workmanship and possible defects of their RoadTrip grills. You will need to hold on to your receipt, and of course, this warranty is provided at their discretion.

What’s in the box?

There is minimal assembly required to get the RoadTrip LXE up and running. All that is needed is putting the wheels on the stand and sliding the handle in place.

Even those with little mechanical skill will have no problems putting the stand together in less than 20 minutes. Those more mechanically inclined should be able to have it together in a quarter of that time.

Out of the box, the Coleman RoadTrip Grill LXE edition is designed to work with 16.4-ounce disposable liquid propane bottles that are available practically everywhere.

For those that prefer the more economical 20 lb refillable LP tanks, a high-pressure adaptor hose from Coleman is available. Please note that when using the adaptor hose to connect to a tank, the tank’s valve must be turned on slowly to stop the regulator from closing prematurely.

The product manual is available online: Click to View (opens in new window) 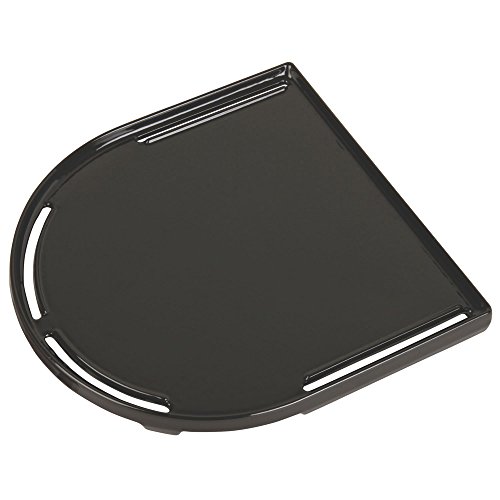 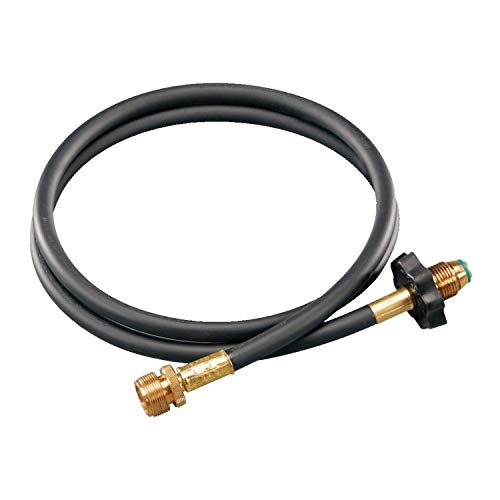 5′ High-Pressure Hose & Adapter Ditch the disposable LP canisters for larger, refillable tanks with this hose and adapter set See it at Amazon 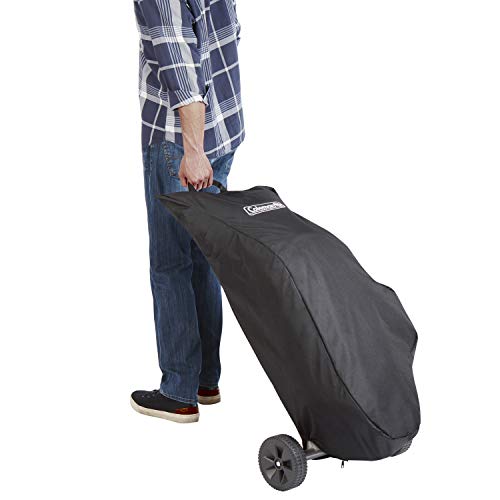 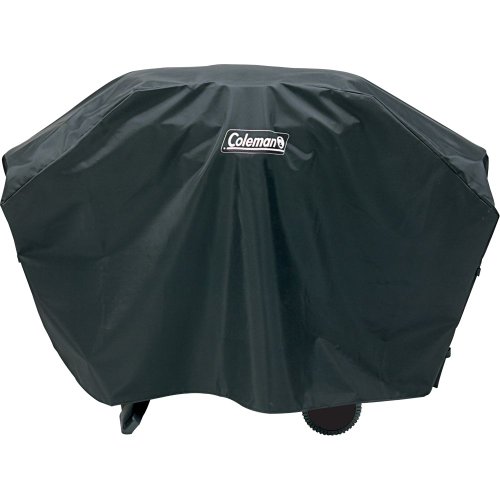 As I noted in the Quality section, several improvements have been made to the LXE over the last few years. These changes have caused a dramatic rise in the overall satisfaction of customers.

Initially, there were many complaints regarding several aspects of the grill. However, it seems that Coleman has addressed many of these issues. Since 2008 or 2009, the majority of customers report being very happy with their purchase.

The image below includes ratings from before changes were made. Even with the old, negative reviews included, 83% of consumers still rate it at 4 stars or better.

Since Coleman seems to have addressed many of the complaints consumers previously had with this grill, I’m willing to recommend it. They have, through trial and error, come through with a product that is both very portable and very capable of cooking in a variety of ways.

I also feel that compared to other portable grills, the Coleman RoadTrip LXE is far more capable of cooking for more than a few people. This is the closest you can get to have a full-size grill that can easily travel with you.

One of my favorite selling points of this unit is the price. You can pick it up on sale from time to time, but even when it’s not on sale, you can find it priced well below $200.

Commissions may be earned from these links.

We use cookies to ensure that we give you the best experience on our website. If you continue to use this site, we will assume that you are happy with it.Ok