Since this site’s inception over a decade ago, I’ve learned what makes an excellent portable grill. The biggest lesson I’ve learned? Because there are so many different styles and features, it’s tough to decide which five grills should be considered the cream of the crop.

These five grills are the best, as far as I am concerned. It’s a collection of grills that have a vast array of features and functionality between them. I hope that within this list, you find the right portable grill for your needs. 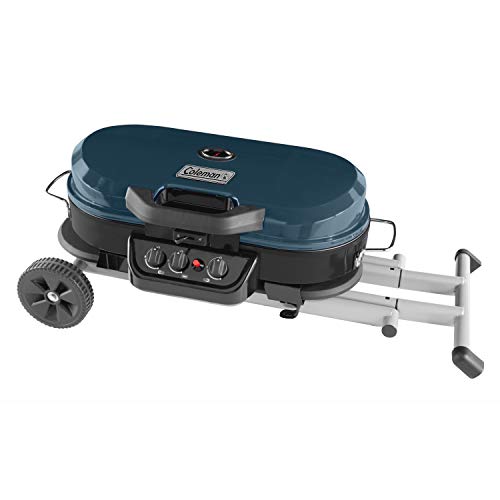 Why We Chose It: This grill is not the best at anything, to be honest. Take nearly any single feature, and there will be another grill that can do it the same or better. It’s the best overall portable grill choice because the Coleman RoadTrip 285 is better at everything as a whole, which is an impressive achievement. It has some cheaper parts that can fail, but it’s a solid design at a moderate price point.

We Really Liked: The RoadTrip 285 has three burners to control temperatures precisely across the entire grill. Previous models had one round burner on each side. The new burner configuration means heat is more evenly distributed on each side and makes cooking indirectly possible.

Where To Use It: It’s heavy for a portable grill, but it sets up and folds down easily. It’s a large grill, but it is easy to move because it has wheels. It has some cheaper parts that can fail, but it’s a solid design at a moderate price point.

How It Cooks: It grills very well with heavy-duty cast-iron grill grates. Temperature control is phenomenal because of its unique burner configuration. And the accessory grates available separately mean camping breakfasts can include pancakes and oatmeal.

Watch Out For: The biggest drawback for me is the water tray to catch grease. This is a design feature that goes back to the original Coleman RoadTrip LX. I wasn’t sold on it then and I’m not now, either. It’s messy and makes it a poor choice for concrete balconies and patios.

Best Portable Grill For the Money Why We Chose It: Weber Q grills are quality grills. We chose the Q1000 because it’s the smaller, bare-bones model and the best value overall. Quality materials go into every Weber Q. They feel rock-solid like they won’t break down if handled too much. Other models have side tables and thermometers, and some are larger.

We Really Liked: It cooks well, and it’s easy to clean. There is lots of space in the firebox to brush out any debris and wipe it down. The grill grates are dishwasher safe.

Where To Use It: The Q1000 is the best choice for balconies and small back yards. If you have a large enough storage compartment in an RV, it’s great for that, too. While it’s much lighter than other portable grills on this list, it’s still hefty enough that you wouldn’t want to carry it far.

How It Cooks: Like all other grills in this series, the Weber Q1000 reaches temperatures beyond what’s needed to sear steaks and burgers. Two heavy-duty grill grates cover the grill for optimal grilling, but griddle grates are available separately and can replace one side should you want to cook vegetables, pancakes, or bacon with your grill. Why We Chose It: While comparable to the Weber Q, the Napoleon is an upgrade. Taking a queue from the Q (ha!), the TravelQ PRO285 uses two looping venturi burners to heat its heavy cast-iron grill. The heat output is less than the Coleman RoadTrip grills for the same amount of grill surface area, but because the firebox is deeper and the burners loop around each side, it easily outperforms it.

We Really Liked: Not unlike a gas stove, the burners self-light when you turn the burner knobs. The wavey lines that make up the grill grate retain a remarkable amount of heat, giving grilled meats perfect sear marks. The lid is tall for a portable grill, which means I can grill whole chickens.

Where To Use It: This isn’t a heavy grill, but it wouldn’t be fun to carry it any actual distance. A version with a stand is available. It is a scissor cart that works a lot like the Coleman RoadTrip style of grill, only way better. A cart will undeniably make it much more portable, though it would make the overall grill larger.

How It Cooks: The PRO285 is incredibly versatile. Whether you like your grill flaming hot or if you cook low and slow, this grill has a little something for everyone. More than anything, I am impressed with the precision of the temperature control. It’s also an excellent choice for indirect cooking.

Watch Out For: This grill uses bulk propane tanks instead of the usual 1 lb disposable cans that every other portable grill uses. The included hose is also a little short; bringing along a crate or stool for the tank to sit on is helpful. An adaptor is available if you absolutely must use disposable LP bottles. Why We Chose It: The Cuisinart Grillster is the smallest and lightest grill on our list, but we decided on it because it is both tremendously portable and reasonably priced. It’s also small enough to cook for two people without wasting fuel.

We Really Liked: At 10 lbs, this is also the lightest grill on our list. It is made from materials such as plastic and pressed steel to balance between weight and sturdiness. The grill grate is different from most – it’s a steel sheet pressed into a wave; it won’t give you the grill marks other types produce but gets extra points for a dishwasher-safe enamel coating.

Where To Use It: The Grillster is a perfect choice for taking to the beach because it’s so light and portable. When the lid is closed, a buckle latch can be securely locked, and the entire grill can be carried by the grill’s lid handle with one hand. The regulator and a 1-lb disposable propane bottle will fit under the lid for transport, though I recommend storing the regulator in a sock to keep debris out of the threads.

How It Cooks: It heats up exceptionally fast, though there is not a lot of difference between its low and high settings. The Grillster’s single burner runs under the solid part of the grill grate. Though this may serve to keep the burner’s grease exposure down, it also creates a big hot spot. Overall, it cooks pretty well, browning meat reasonably well and cooking thick burgers thoroughly.

Watch Out For: Inspect and test your Grillster as soon as you receive it. Some units ship with faulty parts or regulators. Though Cuisinart offers a 3-year warranty on the Grillster, it is an extremely limited warranty and excludes grills not maintained as specified in the manual. Why We Chose It: The Traveler is slick in so many ways. It looks amazing. It folds down into an incredibly compact unit, and it’s the first new portable grill I’ve genuinely been excited for in a very long time. Though the Weber Traveler hasn’t officially been released in North America yet, it has debuted in Europe and Great Britain. I expect a late-May launch on our side of the pond.

We Really Liked: It isn’t just easy to set up, but it’s even easier to put away. Once you step on the leg and pull the handle to start collapsing the stand, it guides itself down and automatically locks itself up. And it’s a lovely looking unit—lots of chrome and a touch of mid-century styling.

Where To Use It: Just about anywhere. The rubberized wheels and secure locks mean that it will go places other grills of its caliber can’t. It would work just as well on a small balcony as it would in the park or tailgating at your next game.

How It Cooks: Check back for this, as I haven’t tested it yet. If I were to guess, I’d say that it would be great for grilling burgers, chicken, steaks, and brats, but because it only has one burner, it won’t do any indirect cooking or large items like whole chickens. It’s a Weber, so I feel comfortable saying that it won’t be underpowered. But again, check back. As soon as I can source one, I will be doing a complete review.

Watch Out For: Though unboxing videos show people letting the grill collapse on itself, the manual warns against this.

The Choice is Yours

In my many years of reviewing portable grills, I’ve found that most models are of decent quality, regardless of price. Understandably, some are terrible, but very few are unredeemable.

Why didn’t I list the actual size of the cooking surface area?

I chose to use your typical 4-inch frozen sized burgers to represent how big the grilling space is for a few reasons: