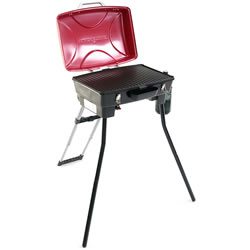 Discontinued
I recently had the opportunity to look over the the Blackstone Dash 1610 portable grill.

I don’t know why I ignored it for so long. Maybe I made assumptions about it and like you, didn’t want to throw good money at what I perceived to be something that made claims that couldn’t possibly be based in reality, and I hesitated to do this review.

Discontinued
It saddens me to say that the Blackstone Dash has been discontinued. I have no comparable recommendations at this time.

The old sales page on Amazon exists for now. If you would like to see their information on the grill, click here.

Could it really be as fully featured, lightweight and portable as the marketing material claimed? Could a portable grill travel, cook and be cleaned as easily as they said?

For a grill that cost less than many other grills with its features, I was skeptical. In this review, I will share the good and bad points I learned about this grill.

About the Blackstone Dash

Highly Portable. At less than 20 lbs, this is one of the lightest portable grills available. It is also one of the easiest to set up and pack away. The Blackstone Dash is just as easy to carry as that little wheeled carry-on sized suitcase. In many cases, much lighter as well.

Economical. An enclosed firebox efficiently traps and disperses heat evenly across the grilling surface. That same enclosed design also helps to use fuel economically. This means the Blackstone Dash takes less fuel to heat up and stay hot.

Versatile. The Blackstone Dash has one solid grate with two sides. Make a delicious breakfast of pancakes, eggs and bacon on the griddle side. To grill hamburgers, steaks and more, simply flip the grate over to use the grill side of the grate. It’s as easy as that! The Blackstone Dash doesn’t require any extra assembly beyond unpacking from the shipping box. How great is that? No confusing instructions or extra tools.

The Blackstone Dash (1610) portable grill uses 1lb liquid propane bottles. There are many several retailers, including Amazon, that carry this type of LP bottle.

Blackstone offers a limited one year warranty from the date of purchase against failing parts, poor workmanship and rusting finishes. You can call Blackstone directly to talk about both warranty and out-of-warranty issues. Blackstone does have replacement parts available for the Dash. Blackstone’s customer service is also very helpful.

The Blackstone Dash doesn’t have any available accessories. However, RV users and tailgaters would benefit from an adaptor and hose to use this grill with larger propane tanks.

You can also take a look at the Product Manual: Click to View (opens in new window) The Blackstone Dash is extremely portable because it’s lightweight and compact when packed up, and only takes seconds to set up.

It has two distinct carrying options. The telescopic handle extends to allow it to be towed behind you, or instead grab it by the grill hood handle to carry it at your side.

Setting it up is simple. After placing the grill on its lid, put together the two front legs and extend the telescopic handle which acts as a third leg. Next, flip it back over onto its legs and hang the grease trap under the lip of the grill. Screw in and tighten the regulator, attach your LP bottle, and you’re ready to grill!

I guarantee that it took me longer to type this out than it will take you to set it up.

Packing it up is just as easy. Just make sure to remove the regulator every time. It sticks out and could easily take some damage.

There are a few points both for and against the Blackstone Dash 1610 when it comes to its ability to cook.

The first point I’d like to talk about is the grill plate. It is very handy to have two different cooking surfaces, but to me, neither is a true grilling surface. I prefer an open grill grate that can let juices drip through and create little tasty flare ups. I would consider it to be more of a camp stove, except it doesn’t have the ability to place cookware on it. In my mind, it needs to boil water to call it a stove. So what would I call it? I’ll have to get back to you on that.

That’s really just semantics, though. The fact is that the Blackstone Dash certainly cooks well. Because the firebox is enclosed, expect to use less propane than other grills. The 7000 BTU burner rating seems low compared to other grills, yet it has little difficulty heating to 400° temperatures with the lid down. This is a big plus.

It also has ample cooking space. The cooking surface is 20″ by 12″ which is plenty of room to grill a dozen brats or eight burgers on the grill side.

And while there is no open flame to lick up extra grease, any excess fat released from cooking will drain into the grease trap.

Make sure it’s level!
If you’re planning to cook anything that has a thin consistency, such as fatty bacon or a group-sized recipe of scrambled eggs, make sure that the Dash is sitting level first. The lip of the griddle grate is not that high and potentially risks overflowing into the fire box.

I love how clean this grill is! Notice that I didn’t say that I love how easy to clean it is, which it is, but its unique design keeps it clean.

I said earlier that I prefer cooking on an open grill. That may be true, but cleaning a closed grill is much easier. Just let it cool down for a few minutes, and wipe it down with some warm, soapy water. Just don’t let the unit cool down completely, or it will become infinitely more difficult to clean.

Don’t use scouring pads or metal cooking utensils on the grill plate as they can damage the non-stick coating.

My initial impression was that it felt cheap, but I quickly changed my mind because many other popular grills are made with very similar materials.

Let’s talk about the stand first. When it’s completely set up, it feels very sturdy. As long as it’s on a stable surface and not precariously perched, it won’t wobble.

The grill body is made of a thin gauge of steel, and it has a protective coating on the body to prevent rusting. Again, many more expensive grills are constructed with the same materials. The grill grate is light weight and probably made of cast aluminum but I have not yet confirmed that. The non-stick coating will likely last with proper care.

I like how a chain attaches a matchstick holder to the grill body. This is a thoughtful feature because I feel that the push-button striker ignitions give out at the exact time that you need it to work.

There have been some reports of screws falling out, but from what I can see, it isn’t a wide-spread issue. If it happens, contact Blackstone.

People love it! The Blackstone Dash 1610 is highly praised for many different reasons, but mainly because of its price, its ability to cook, and how easy it is to transport.

I collected ratings from several different retailers, and learned that over 92% of Blackstone Dash owners gave it 4 stars or better! That’s practically unheard of!

This is a very portable grill at a very affordable price. I have some reservations regarding its performance long-term, but at this moment in time I can’t ignore how many people are very satisfied with the Blackstone Dash 1610 portable grill.

Prices and Where to Buy the Blackstone Dash [1610]

I have been tracking this grill since it first appeared on my radar back in April of 2015, and retailers tend to price it at about $100 – $120. From what I’ve learned, it’s a great value.

Of course, if you see it on sale, grab it!

DISCONTINUED
Check for sellers on:

No other retailers available at this time.

Commissions may be earned from this link.

Scroll back to top
We use cookies to ensure that we give you the best experience on our website. If you continue to use this site, we will assume that you are happy with it.Ok